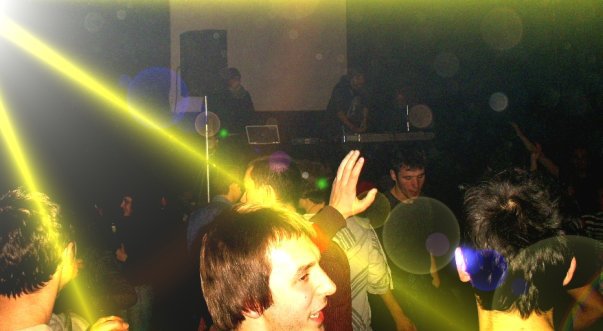 Presale tickets for this event were 3 euro and 4 euro if you bought them at the door. DNB-KS was the organizer. This was the third big event they organized. Before that, they brought Big Bud from London and DJ Lynx also from London, and now Black Sun Empire from Holland. ODA is a great underground place, at least I like it, it’s totally my type of place. It’s in the center of the city, it’s underground, secluded, you don’t bother anyone.

There’s a bar at the entrance, and after that a great spacious room, with a great stage and on both sides there are steps, where you can easily sit down and not bother anyone. And the sound system is good too.

Labinot Sponca (a local DJ) was the warm up act. What did he spin? DnB. And I love everything that shakes you up and carries your entire body. All the way till Black Sun Empire started my group of friends was jumping. Even one of our friends who didn’t expect that we’d take her drumming, and she too jumped and shook all the time. And while we were jumping, we didn’t even notice that the space filled out with people who were waving their hands and dancing. And then, when Black Sun Empire started spinning later, you could see that the audience would jump on the stage if they could.

Everybody went crazy, and jumped without a break till 3.30 am. At least that’s till when I stayed, as I had to work on the morning show the next day. And the entire next day I spoke about the previous night’s party.

So don’t say later that Flektiza never went drumming, cause I have, and in a proper way. I enjoyed it. And you can imagine how much the people that really like drum and base enjoyed the party.

Here are some photos I was able to get.