..It still fascinates me how this kind of music is still sounding fresh... 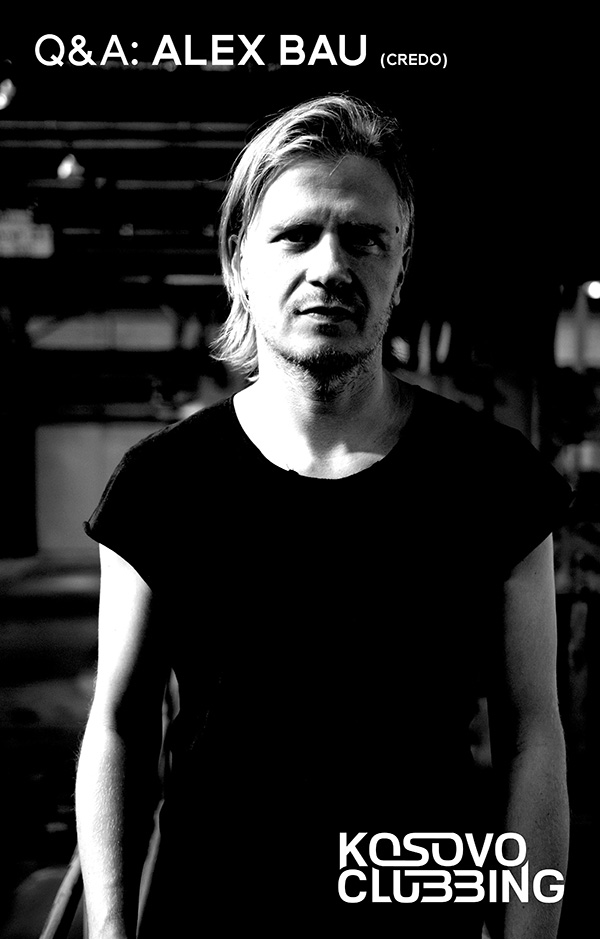 - Hi Alex, thank you for your time for the interview. Can you give us a short introduction to you & CREDO?

A: Sure. My name is Alex Bau, I´m a german techno dj and producer and the living proof that there is techno in Germany also outside of Berlin as I´m living in Munich ;-) I have released my own music on labels like Cocoon, CLR, Sleaze Records, Sino and CREDO of course. CREDO is my record label i founded back in 2007, so this year we have reached the 10 year anniversary with around 50 releases by end of the year.

- When did your journey into electronic music, started / What inspiries you, through this journey?

A: My first contacts to electronic music was probably the sound of the 80ies, when I was listening to a lot of typical 80ies pop music in the radio as a kid and teenager and then later started to buy records out of that time. My first contact to what was called Techno back then was on new year`s eve 1991 / 1992. I hated it, no joke! But already couple of months later, when I looked beyond the shitty overground tracks I started to love it. It still fascinates me how this kind of music is still sounding fresh and is not getting boring after so many years, even though the track patterns are pretty much the same for more then two decades now. I suppose it`s the unlimited sound that keeps it interesting.

- Could you provide us some information, regarding "CREDO.TEN" VA / showcase?

A: There is a various artist compilation called 'CREDO.TEN' because of the ten years anniversary of the label, featuring tracks by LVRZ, Subvoice, Leghau, Sophiite, Nastia Reigel, Kyle Geiger, Dirty Basscore, Vloyd, Mikael Jonasson and myself of course, this time together with The Horrorist. Most of them are regular artists on the label like Dirty Basscore, Mikael Jonasson, Vloyd and Nastia Reigel or have released on CREDO already before like the others. Only LVRZ and Subvoice are new to the label. As part of the ten years anniversary we also host some showcases in clubs and on events throughout the whole year. So far we have visited Frankfurt, Munich, Leipzig and soon to come Barcelona, Seoul, Zurich, New York, Amsterdam and let`s see, maybe we also come down to Kosovo...

- A few words for your recent releases (Behind feat. The Horrorist / 1992 EP incl. Mark Broom Repaint)? What inspired you to produce those tracks?

A: The 'Behind' track came up after Oliver (The Horrorist) dropped me an email that he really loves the "On Synth" track i did on Cocoon before. He proposed to start a cooperation and so I sent him a very basic version of "Behind", actually just Drums and the Bassline, and he started to record the lyrics. Then I edited the track and finally we now released the technoversion. There`s also a hidden version on the 'CREDO.TEN' cd, this version will also be released officially later this year on Dj Hell`s Gigolo-label. The '1992 EP' came up after I finished "Press", which has undoubtly this kind of early rave-days approach with this rave-signal sound. Then I did the "Dare"-track, a really heavy acid-bassline, monster that also sounds a bit like the very early technodays. And for getting a proper remix I needed somebody that understands where the music came from back then, so Mark Broom was perfect! I love his productions and the way he influenced techno, especially in the UK.

- What equipment are you currently using, for DJing & Producing?

A: I´m djing with a rather complex DJ-setup including Traktor synced with Ableton and the Maschine. This way I can perfectly create the flow of the night I consider to be essential for moving the vibe and the crowd. And my studio equipment is very unspectacular, but also secret ;-) Most of you wouldn`t believe how simple I create my tracks because very often people tell me "Alex, your sound is so pure and analog, you must have a great studio...", but actually it`s very simple. And no, I don`t use Ableton in the studio.

- What are your favourite tracks to play at your gigs?

A: Hmmm, difficult. It depends from gig to gig and I love playing new tracks. But sometimes I also love to dig out older tracks or even classics.

- At the moment, at which artists are you keeping an eye on?

A: I`m very happy that i gathered some very talented artists on CREDO and there are more to come in the near future. But I also love other artists apart from the guys that release on CREDO. One of my top favs currently is Architectural and Tensal, both from Spain I think. They deliver amazing stuff.

- In 2010, you had a collab with Vegim, where he remixed your track 'Lofi Micro'. Are you still following Kosovo's artists and their production?

A: Yes, of course. Vegim is a big talent, well actually not a talent anymore, he made his name. I also like the stuff from Pumio Space a lot, very musical and interesting approach.

- How would you describe your experience of playing for the first time in Kosovo at MAD Sound festival, last July?

A: I was very happy to be invited, it was a nice experience. I love coming to places I never visited before, and I can remember the crowd was very open minded. It became a bit cold during the night, though it was summer, but there`s nothing you can do against the weather of course. It`s defintely a place I want to return to.

- What can we expcet from you in the future?

A: Right now I´m spending a lot of time on CREDO together with my labelteam, both events and productions. All tracks released on CREDO are shaped in a very special way soundwise, that costs a lot of time and energy, but it`s necessary to shape a unique sound on the label. Apart from this I also started to work on new Alex Bau material. Maybe I´ll do another release on Cocoon later this year or next year. And I also slowly started to work on a new album to come next year. I have some nice ideas in mind, let`s see...

A: Actually only two things: stay true to yourself, don`t try to copy existing artists and be patient, don`t try to push and force things too much. it`s art, you can`t push this anyway. It happens or not.

A: Puhhh... as I said, I like going to new places, so maybe I haven`t seen my favourite country or place yet. But I also always love to return home. Favourite food, hm, maybe "Hörnli mit Hack" Now go and google!!! ;-) Drink: Spezi. And quote, well, I´d like to use my own words: expect parties to be like movies. You guys on the dancefloor are the main actors, I am just delivering the soundtrack... ;-) And maybe one more: don`t think about what the party can do for you, try to think about what you can do for the party!

- What's your message to your fans / Kosovo clubbers?