Coronavirus is keeping Berlin's techno clubs closed but Berghain has found a way to throw its doors back open, luring visitors with an unusual sound exhibition. 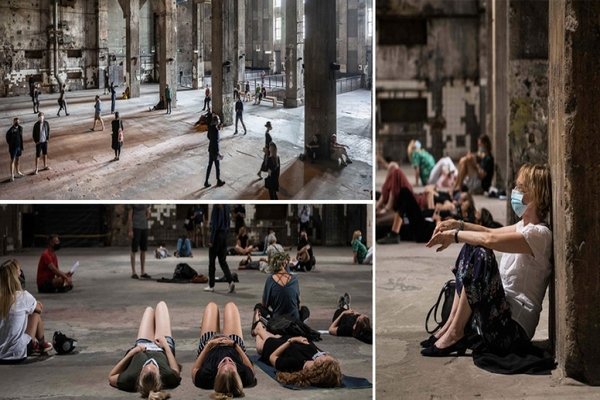 The controversial Berlin club Berghain closed back in March 2020 due to a coronavirus.

Just 50 people are let in at a time to allow for physical distancing, but without the venue's notoriously picky doormen standing guard, no one has to worry about being denied entry.

The sound of techno will not fill the space during this first installation.

Instead, visitors to the former power plant are enveloped by an eery, almost surreal soundscape of rhythmic throbbing, soft city noises, murmurings and even the whirling of helicopter blades.

"You listen, you experience, you can close your eyes or leave them open and follow the sound across the room," said Carsten Seiffarth, co-curator of the Singuhr projects, a platform that organises sound art installations.

The show, known as "Eleven songs -- Hall at Berghain", is the brainchild of artistic duo Sam Auinger and Hannes Strobl and runs until 2 August. 2020.

Fellow curator Markus Steffens said the pair were invited to come up with an acoustic experience "for and with the space" -- a concrete, high-ceilinged former machine hall located behind the main club rooms worshipped by techno lovers worldwide. "

The room itself is a kind of instrument to them," Steffens said, where the sound interacts with the architecture to create different listening experiences.

Recently, the German government announced that they had extended the ban on major events until at least October.