..... people that came to listen to the music threw some sort of spray, teargas or something, looks like the music hit them straight in their hearts.... 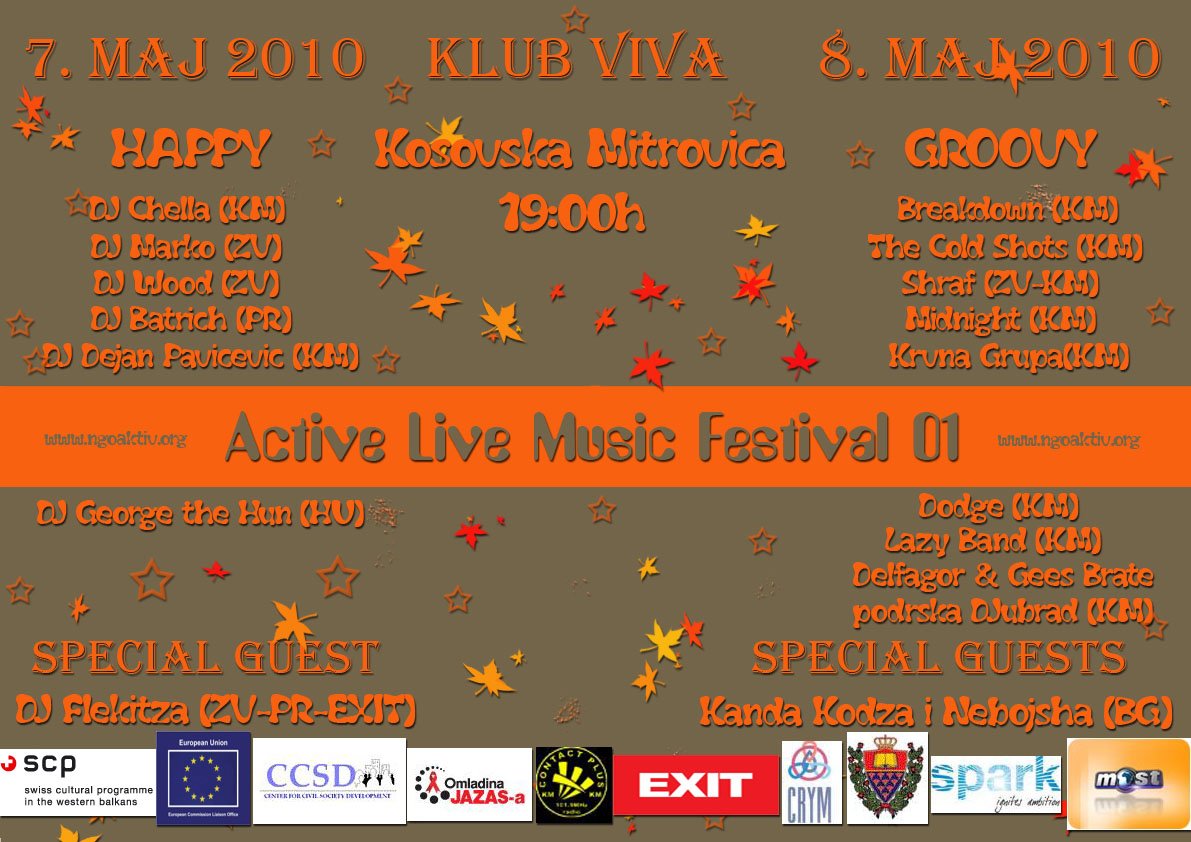 Then came the Active Live Music Festival, where I played too, but very shortly because the people that came to listen to the music threw some sort of spray, teargas or something, looks like the music hit them straight in their hearts.

There was a game that was watched, so maybe they thought that at the party one should cheer and throw teargas, same as you would do in a stadium. They know the reasons the best, and we aren’t interested much in that. We’ll leave everything that doesn’t deal with music, dancing and hugging to someone else.

Here is the announcement for the festival, so that you know why it was held.

And by clicking on the following links you can listen to two bands and a DJ announcing themselves for the said festival: Band – Kanda , Kođa i Nebojša , Band – Šraf, DJ Battrič.

As well as part of the report of one of the organizers:

Petar Pan: “The concept of the festival, no matter how original and imaginative it can be, depends from a couple of factors – among others from finances, selection of participants, place where it is held, and visitors that come. On May 7th, 2010 at the club Viva, around 8 pm the first day of the festival started. DJ Dejan Pavičevič was the first one to spin his CDs. One of the most experienced musicians in Mitrovica, with the selection of great tracks, he took us into the world of electronic music and announces a wonderful night called happy Mitrovica. Afterwards, famous DJ Marko from Zvecan and DJ George the Hun from Hungary played back to back. We enjoyed a progressive sound for those two hours.

DJ Wood, according to what many were saying, pleasantly surprised people with the tracks he chose. Commercial music is always welcome. Regular DJ Batrič, with his minimal sound, was heard to the max all the way to Belgrade and Novi Sad where he usually plays. And of course, the star of the night DJ Flekitza, with the newest techno sounds enriched the festival’s content and idea, so that the doors of Active Lice Music Fest will always be open for her.

I should also mention that Partizan played with someone that night, and that later, at the end of the night, we laughed to tears for some reason.

The second day of the festival started around 9 pm on May 8th, 2010 at the club Viva. With a lot of optimism and desire for good sound and beer, the second night started called GROOVY Mitrovica. That second night of the festival, youth gathered to follow one of the rare musical happenings where you could hear almost all music genres in one night. They say “on the youth…” so Midnight, as the youngest bend, opened the second night and with a great gig showed that they have the courage for big events like this one.

The Cold Shots a great, a young pop band. Krvna Grupa and their fast sounds were enough to stir up the lovers of metal, as well as the other festival visitors. It was the turn for the starts of the night to perform, one of the best Serbian reggae bands Kanda Kođa i Nebojša. They deserve all praises for originality, a great performance and even better lyrics. The cheering audience urged them to perform an encore (thank you audience). KKN left a great impression, and probably got some new admirers and/or future faithful fans…”

And then the announcements for: North city Jazz and blues festival, ReMusica, Freedom Festival