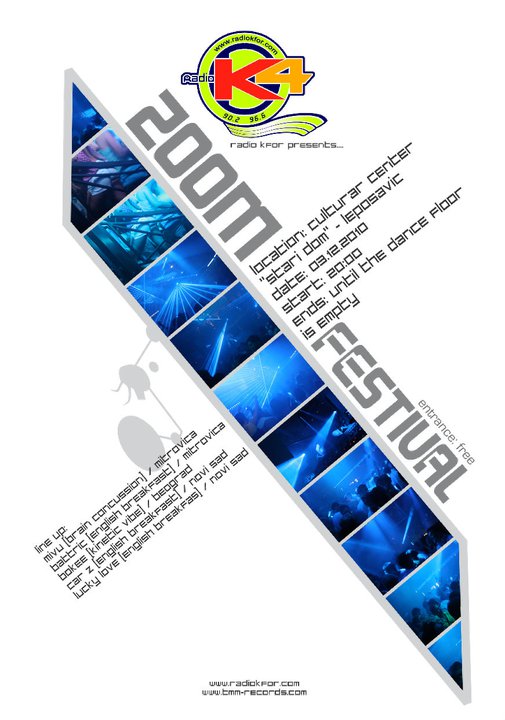 And trust me, I have waited to overcome the bad feelings I had at the start of the party there. But somehow, I can’t get them out of my head. After the successful festival in Mitro “Feel the Peace” where everything was unbelievably super cool, with super young people who want to hang out and listen to music and in the hope that it would be the same in Leposavic, if not better, I was disappointed a little bit. You won’t believe me, but there are still people there that mix up some things, and I expected that in Mitro, but no, it happened in Leposavic.

Even though the House of Culture was reserved for the festival, both with an oral and written agreement, and music was supposed to start at 8pm and go on till 4am. But, the karate players had to hold their three hour long training (till 10pm); otherwise they would have practiced karate on us. Then, before the party, a man, dead serious, told me that he is sure the party is promoting the elections. I just asked him, “what elections,” making him aware that he is the one burdened with it, and not we, the ones that came to listen to music. And then I realized that there were also a lot of young people that are full of hate towards ugly people, but really, can you really tell based on ugliness what kind of a person one is, well somebody finds me ugly as well, no...

But anyways, I think it’s all because of alcohol, which will evaporate one day. They showed hatred towards my Albanian friends who had come to meet clubbers from Leposavic, good people, and it’s great that they didn’t do as they were told, they didn’t go home. And thank you to the people from Mitrovica and from Zvecan who came for the music, the dancing, this... I feel bad mentioning people that frequent some Vox club, I was told they are dangerous when they get drunk, but I think they are just people that like to get drunk and to listen to what they listen to, and to fight, because that makes them feel strong, and I think they are not bad people at all, they just behave like that, I guess people should enjoy their music.

And you know what I realized afterwards, people from the Vox club would never come to a festival of electronic music, when they know how to enjoy themselves with rakia and folk music. Why would they ruin their trip, right? That is great too, everybody should enjoy their own drugs.

At “Zoom,” the clubbers that came – respect for all, because they were real – they listened to the great b2b Batric and Mivu, and then Bokee from Belgrade who already has an audience here, Lucky Love with this psychedelic melodies, and in the end great Tsar Z, with his Berlin minimal sounds.

You can find photos from “Zoom” festival here!

And a short audio review from Radio MIR here!

It’s super cool that I still can go clubbing in Kosovo with good parties and good music. I’m getting ready for December 24th and Eelke Kleijn in Full House, I have a feeling it will be a great party.