...who is are using zeolite feel improved mental clarity, a sense of peace, prosperity and happiness 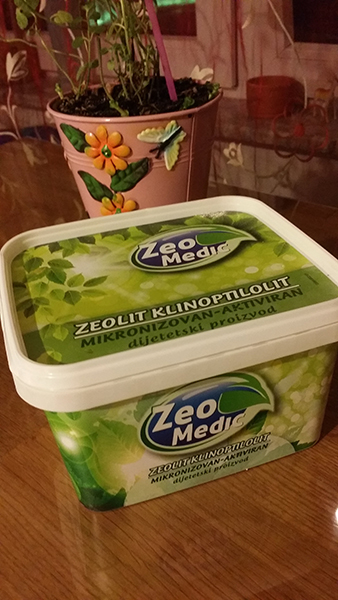 The name zeolite comes from the Greek words-zeo – vapor and lithos - stone. It comes from volcanic rocks that have caused deposition of gases and vapors in the oceans. The “inventor” or discoverer of zeolite is Axel Fredrik Cronstedt, a Swedish mineralogist. Zeolites can be fibrous, leafy and crystalline. Zeolite has an arbour structure, and his crystals containing trace elements including sodium, calcium, potassium, and magnesium. These are all of great importance for your health.

improve immunity
balance metabolism
block the further development of a viral infection, such as virus herpetic1, coxsackie virus B-5, ECCO - 7 virus and adenovirus 5
eliminate and treat colds, flu, fever, hepatitis C
release the body from heavy metals, which is caused by the action of multiple sclerosis and rheumatoid arthritis
reduce fatigue
suppress tumor growth and contribute to a better filing of chemotherapy and radiation therapy
regulate blood sugar and blood fats
prevent the development of atherosclerosis
regulate high blood pressure
help with nausea in the stomach
relieve gastritis
reduce bloating in inflammation and cirrhosis of the liver
reduce pain, stiffness and improves mobility of happiness
heal various mycoses, eczema and psoriasis
help to protect skin from constant attacks of free radicals and inflammation and is particularly useful for increasing the level of collagen and skin elasticity
increase serotonin

Those who is are using zeolite feel improved mental clarity, a sense of peace, prosperity and happiness.

The US military has long been using zeolite powder as their first aid for wound healing. One of the best deposits of volcanic minerals is located in Kosovo; and by some conclusions, is the reason why the Americans occupied the territory, it is because of zeolite :D When zeolite is added to a smaller amount of land for growing corn, tomatoes and other plants, plants are grow significantly higher than those that do not add this mineral. All naturally!

Zeolite, as a supplement for normal use, can be used one - three tablespoons a day (about 3 grams). When you increase the dose, increase the volume of the recommended intake of liquids, When you feel thirsty, make sure you drink some water feeling of, because that is the sign of detoxification (and you must stay hydrated)!

Dozens of different types of zeolites with different structures and chemical compositions can be found in the world, but for the purpose of human therapy, the only one used is clinoptilolite.

The use of zeolite in therapy has been used for at least a thousand years. This mineral is an important cure in Ayurvedic (Indian traditional medicine) and traditional Chinese medicine. It has also recently appeared in Russian popular medicine.

In many cases, antiviral effects of zeolite can be seen immediately.
If you decide to use it daily, then after two months, take a one month pause, then continue.

Zeolite directs the body to increase its alkalinity of establishing a pH level somewhere between 7.35 and 7.45, as is the optimum pH value of the body; pH value affects body immunity and brain function, which are pretty important! The acidic pH value (7.34 or less) creates conditions for cancer. In the acidic environment, cells and brain function are also weakened, causing depression, anxiety, numbness, paranoia, delusions, hallucinations, and even psychosis.

Since zeolite is known as a potent antioxidant, it stabilizes free radicals, known as causative agents, of many diseases. Zeolite activates and deactivates T and D lymphocytes , which may help patients with autoimmune diseases, such as AIDS, for example.

Where there is cell injury, zeolite, with ion exchange, leads magnesium, calcium and other minerals of which it was built, prevents further damaging of cells at the place of injury.

The essence of zeolite is that it brings nutrients into the cells and takes apart and wastes metabolic products. It can be mixed with drinking water, but can also be applied to the skin or where there are other unwanted changes on your body.

Zeolite is completely harmless to your body, Zeolite is widely used in medicine, veterinary medicine and agriculture, and is particularly recommended as a cleaner of aflatoxin.