RWXVI x DEnacht E02 – A night that will be long remembered

Since it’s raise, the Berlin Wall was a political and a cultural barrier. The fall of the wall was the start of many great artists and clubs like Ostgut Ton's Berghain, E-Werk and Tresor which made Berlin's techno scene very impactful and inspiring. 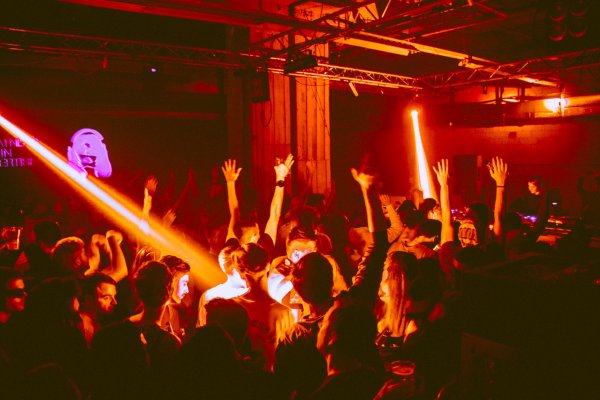 To celebrate the 30th Anniversay of the Fall of the Berlin Wall, Hapësira organized RWXVI x DEnacht E02 in collaboration with the German Embassy in Prishtina, in love and honor of Germany, it’s electronic music scene and Ambassador Held without whose support “Rilindja Warehouse” would have been taken from Hapësira, leaving us the electronic music community without our favourite venue where so many unforgettable memories were made.

As always, we went to Rilindja Warehouse before the doors were open to avoid the queue so we could be inside from start to end, to listen to the performances of each artist. While we were waiting for the doors to open, we were listening to Answer Code Request – The 4th Verdict [Ostgut Ton] & FBK – To A Place I Know [burek] (a track we discovered from Answer Code Requests’s Boiler Room Berlin DJ Set We loved the track!).

The DJ from Belgrade Zhe Pechorin took over after Nårt Zé. At some point during her set, she played Daniel Avery – Diminuendo (Patrick Rusell Remix) [Phantasy Sound].
Mr. Acid took control of the lights. His warm, orange lights melted us <3

Lux started playing around 1:00 AM. The dancefloor was packed.

Finally, the time for the Ostgut Ton musical masterminds Tobias and Answer Code Request to take the stage came. Their extraordinary performances left us speechless!

The vibe was amazing!
Mr.Acid was positioned on the left of the dancefloor, near the DJ’s. The way he synced the lights with the music was amazing. We’ve never seen anything like his lights before. We were in love with his lights! On the right side of the dancefloor, there was a replica of the wall created by Arta Rudaku and the crowd, including the ambassador were signing their names on the wall, just like people did on the actual wall.

A guy showed up and he was begging us to try his glasses. We understood why after we put the glasses on. The red lenses turned the dancefloor into a red vision. It was crazy! He even begged Mr.Acid to try the glasses.

Around 5-6 AM, we went outside to get some fresh air. We saw something we didn’t expect to see. The after party was going on at the parking lot, while Answer Code Request was still playing inside. Someone was playing music on his car and people were dancing. We’ve never experienced something like that in Prishtina before.