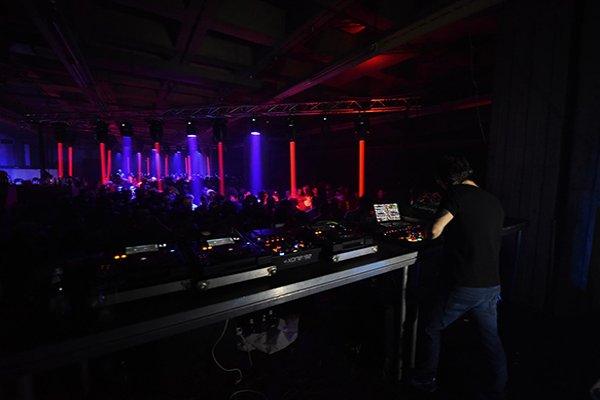 Everything was ready at the abandoned/former Rilindja Printing House, for the 9th Edition of Rilindja Warehouse, and so were we.

While waiting outside for the doors to open, we met a clique of techno/rave enthusiasts from Prishtina, who we started a conversation with, and asked us if we attended previous Editions of Rilindja Warehouse, as they told us:

"This is our first time attending Rilindja Warehouse, so we would like to know what's the events are like here"

So, we continued our conversation about the event we were about to attend in 30 minutes/Hapësira and we told them about the "Rilindja Warehouse" editions we attended in the past. We also informed them about Hapësira's concept of presenting techno artists who are actually growing further, to make them famous, and how it's aiming to present artists who are involved on the field of melodic/groovy/acid techno.

We were really happy we got to meet this clique of techno/rave enthusiasts from Prishtina, and knowing the fact they came to listen the kind of techno we as team are obsessed with, was very pleasant!

" Hapësira's warehouse project might seem a risky concept in which the idea is to venture beyond the established club route, finding itself in spaces never used before in this manner." - Hapësira

The doors opened at 10:30 PM and we passed through the corridor to the techno room. When we entered the room, there was already a happy vibe going on, with people dancing and enjoying what they came for, techno. Consisting proper lightning and the best soundsystem available in our cuntry (provided by Duka Alfa Audio), which are the main factors of an event, it's no wonder the vibes at Rilindja Warehouse, are always good. Besides lighting and soundsystem, the out of function printers which surround us are the most important factors of "Rilindja Warehouse", so that's why Hapësira never tried to displace them since the 1st Edition of Rilindja Warehouse, because those printers are the indicators of the warehouse. With all of those lighs and that proper soundsystem, we would lose the perception of raving in an abandoned warehouse, if we weren't surrounded by those out of function printers, as sometimes we may think we are in a club, but then we look left and right, and when we realize that we are surrounded by printers, we re-realize we are in an abandoned warehouse.

In the absence of Ivi Abazi, who was scheduleed to open the event, Uran B. jumped on board to set the mood, starting his DJ set with an ambient track from Northern Electronics and later, altering to techno over the course which led us to the LIVE performance of Artefakt.

The 9th Edition of “Rilindja Warehouse’, which at first was meant to be a night that would bring together two of the most interesting artists of today’s techno industry, Artefakt & Keith Carnal, turned into a special night for Artefakt, who ended up playing an extra, 2h DJ Set afther their LIVE performance, in the absence of Keith Carnal.

What we an we say about Artefakt?

Listening to a spontaneus, LIVE melodic/groovy/acid techno composite, through their analogue gear and an extra DJ Set with the consistency of carefuly chosen tracks, was just unbelievable!

Since the very beginning of it’s warehouse project, Hapësira names local artists as “gold” therefore, local artists have always been present on every edition of Rilindja Warehouse. #RWIX was the night where Vegim showed us what it’s like to be unique and unusual, with his remarkable techno set. Vegim took control by the early morning’s dawn, until the very end. What a gratifying and enlightening set! We sure remember something from Vegim’s set, we will never forget the moments when Vegim hit us with ‘Nemir’ by Lag and ‘Magma’ by Inigo Kennedy, then with the never boring industrial bomb from 2013 'Key' with its tunneling bass riffs by Xhin as well as the new track "Furie" of the talented Sandra Mosh, from Vegim's label TMM records, among the rest of the techno tracks he shared with us that night.

Hapësira succeeded in pulling the young generation to Electronic Music to step out of the club, through it’s warehouse project. This time, the dancefloor was packed with new faces/clubbers, and it was easily perceived. Although some of them didn’t know what techno was till then, they sincerely enjoyed the sounds that were causing their bodies to move.

While our #RWIX memories are still fresh, Hapësira announced the milestone edition of it’s warehouse project.

Lineup and ticket information to be announced. Stay with us & Hapësira!

Stick around for the event!