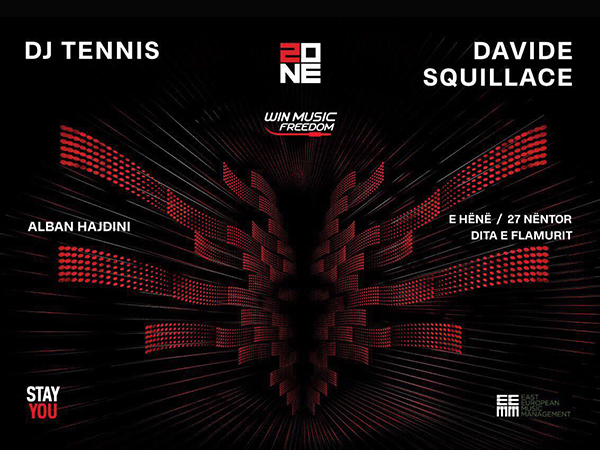 I was clubbing in Prishtina for the first time in 20 years :) I had heard that clubbing on Kosovo was very developed and following the world electronic scene. And it was true!

I had the chance to meet and see contemporary cult places of today's underground scene: Rilindjia, Bahnhof, BASStore and all of them have their own story!

But, Zone Club is a special place for me! A club that is full of emotions and good but odd, energetic. If you are familiar with quality music and all other accompanying elements, in fact, if you're a clubber, then Zone Club and its Electronic Series is for you!

The first time I visited Zone Club, last winter, on December 24th with Nastia and Hajdar Berisha... was amazing!

And ... again I wanted to go back to this club, a club that has this strange, odd energy!

Last night was the night! Actually, the Electronic Series Night of the Zone club. Line Up:Dj Tennis, Davide Squillace i Alban Hi-Dini... what can I say ?! Really just a big thank you for everything!! Staff were wonderful and the security was perfect! The sound system was WOW! Lights and visual program were great, everything just right!

The music repertoire was mostly house with the addition of indie melodies. Dj Tennis delighted with technical part of mixing and the choice of tracks. Davide Squillace continued in the same rhythm with some groovy tracks, while  Alban Hi-Dini had a lot of oriental intrusion, which dancefloor liked.

Zone Club is actually a very fancy place but there are a lots of urban-underground people who like electronic music and they probably come to Zone Club on Electronic Series nights.

Zone Club team, works on an evening with electronic music, in cooperation with Win Music Freedom KS, contributes to the development of clubbing, electornig lifestyle, tourism and sightseeing city Pristina! Every honor! Greetings to Kushtrim Sahiti, one of the key names involved in Club Zone and Erjona Gjikolli who warmly welcomed us. Thank you! Music and dance have no limits!

So far, I have met a huge number of good people, and those who are in charge of the underground electronic scene on Kosovo, among them I would like to mention Budalica!

Have to add that people in Pristina are very friendly and they speak in all languages, Albanian, English, Serbian ... and I was lovely surprised  ... We all need that!

See you again at the Zone club :)