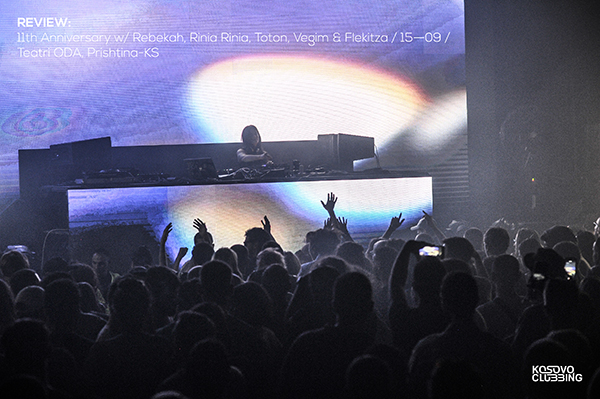 September 15, Next Level hosted a proper techno night with nowadays Techno Lady - Rebekah, Rinia Rinia from Macedonia, Toton, Vegim & Flekitza - local support, from Prishtina, on the occasion of it’s 11th anniversary. The event took place at Teatri ODA - a private theatre in Prishtina. We went there around 11:00 PM, while Rinia Rinia from Skopje, was opening the night, with his tech house set, until around 00:30 AM. Afterwards, Toton, took care of warming up the audience for Rebekah’s “Live Hybrid Set”, with his tech house/techno set. People were so warmed up for Rebekah! Very good set by Toton! Rebekah played a “Live Hybrid” techno set from 2:30 AM until 4:30 PM. Rebekah’s “Live Hybrid Set” was beyond perfect! She was 4 deck mixing, all the time, so maybe some of you can say it was so confusing, with all of those elements she was adding to the tracks that she was playing, but it was such an energetic set! The energy never decreased, it was static & kept increasing, until the very end of her performance.

The visuals were decent, big support for VJ! He was totally following the techno vibe/sounds, with his visuals. The soundsystem was lacking in quality a little bit, but that wasn’t stopping ravers/techno lovers to enjoy what they were there for. The venue was overcrowded. We were surrounded by rave/techno freaks. Everyone was enjoying the party to the max and they were so energetic. The vibes were so positive, everyone was happy. Except national ravers, foreign ravers were present there, too. We remember bumping into some techno freaks from Belgium. We introduced ourselves to each other, discussed about the event, the music & stuff. Afterwards, those guys asked us if there was an “after party”, we told them that the “after party” would take place at Prishtina’s Train Station & directed them there.

After the performances of: Rinia Rinia, Toton & Rebekah, the techno duo from Prishtina - Vegim & Flekitza, closed the night with their proper techno, 2 Hours & 30 Minutes set. But, that wasn’t the end. They were scheduled to play at the “after party”, which took place at Bahnhof Prishtina club.

After Vegim & Flekitza packed their dj equipment, we took a cab and headed to Bahnhof, around 8:00 AM. That morning, was the first time that we went to Bahnhof Prishtina, after it’s renovation. The new interior design was so nice! Vegim & Flekitza, played an extended 3h set. Maybe, they played longer than 3 hours, but we left Bahnhof around 11:00 AM so, we only listened to them for 3 Hours. Indeed, we danced to their music for 5 hours & 30 minutes, including the “after party”. We had such a great time at the “after party”! We were still tripping, despite the fact that we danced like crazy, for 8 Hours straight, at the “main party”! We were tired, but the love for the music & the feelings that we got, by listening to Vegim’s & Flekitza’s music, made possible for us to resist & kept us moving.

Bringing the Techno Lady - Rebekah to perform in Prishtina, was a very good move from Next Level! We were/still are happy about it, because we can’t travel outside of Kosovo for Techno Events, as we don’t possess free visas. Also, we have to mention tha Next Level gave a big support to Local Artists. Adding Vegim & Flekitza to the line-up, to close the night, was a good move as well. Well played Next Level! You showed us how a Techno Party should be done!

It was a proper, intense, 12 Hour Techno Party.